Keeping up with food policy news isn’t always easy. With all the changes coming from Washington and the states (even Massachusetts isn’t immune), sometimes policy changes that affect the food environment fly under the radar. Often, policies seemingly unrelated to hunger prevention can have a profound effect on programs that fight food insecurity and promote access to healthy food for all. Some of these programs and proposals are obviously related to food access. Others don’t seem to have much to do with food at first glance. All of them have the potential to make a big difference in where our food comes from, how healthy it is, and how it affects our planet and our communities. 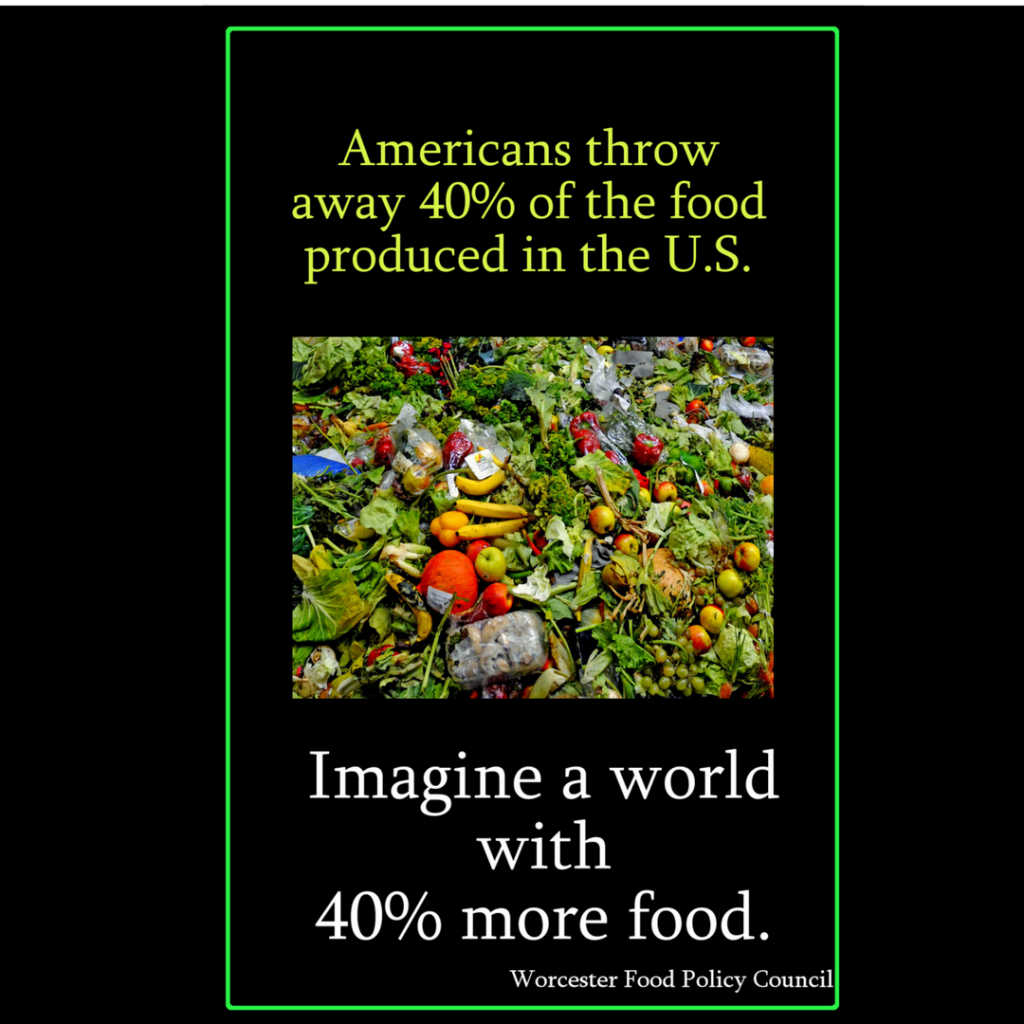 We’ve all heard it before – Americans waste 40% of the food produced in the U.S. That figure has come in for some criticism lately – and rightly. It suggests that individuals are responsible for the amount of food thrown away in the U.S. and we can reduce it by taking individual actions. While there are certainly things you can do to reduce the amount of food your household wastes, bigger changes require something a little more lasting. That’s why Representative Chellee Pingree (D-Maine) and Sen. Richard Blumenthal (D-Connecticut) have teamed up to file legislation aimed at reducing the food waste and increasing food recovery in the U.S. House bill HR 3444 calls for coordination among the FDA, the EPA and the USDA in several areas. Among other things, the Food Recovery Act will standardize food labeling (to differentiate between Best Quality dates and safety dates), and will require companies that contract with the federal government to include a plan for dealing with surplus food in their proposals. Rep. Pingree believes that these companies should take responsibility for the surplus food they accumulate, and not shift the costs to taxpayers and individuals. Learn more about the bill and keep up with food policy news regarding wasted food and food recovery at Waste 360.

Pro Tip: Take the Food Waste Challenge (and check out the cool thing we made last year about reducing wasted food in your household!) 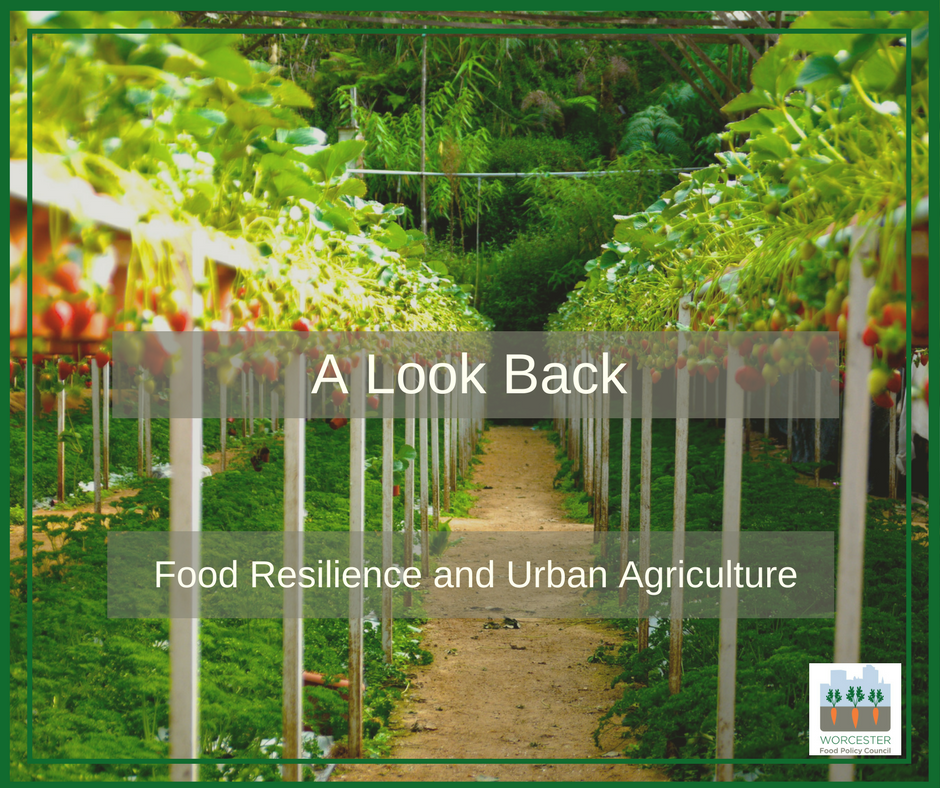 It’s no big surprise that we’re still talking about urban farming and urban agriculture. Local food production offers so many benefits for the community that ignoring it is a bonehead move. Here in Worcester, we’re still working on passing a zoning change ordinance that will encourage and promote many types of urban farming, from backyard garden plots to aquaponics and scalable indoor container farms. Decisions made by politicians at the state, local and federal level can all affect how urban agriculture – and the opportunities it presents – will look in Worcester. Among other things, the “tax cut” bill signed at the very end of last year is likely to hit local non-profits with big funding cuts – and since much of the work that goes into starting and maintaining community farms and gardens is done by non-profit entities, the fallout may stall some of that work. Meanwhile, rule changes that nominally “clear the way” for business innovation may instead make it harder for new startups – especially those in innovative fields like aquaponics and vertical gardening – to hold their own against large agricultural concerns. 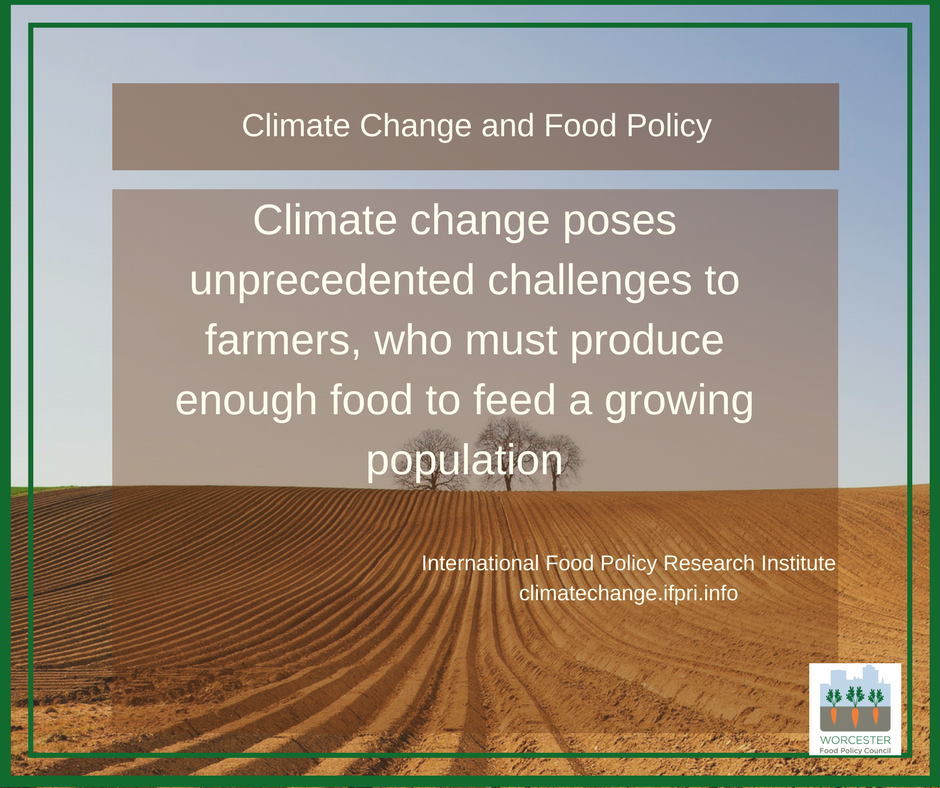 While rules changes at agencies like the EPA are supposedly going to “unshackle” businesses from “burdensome regulations,” many critics fear that instead, they will allow businesses to damage the environment and reduce protections for consumers. In less than a year, current EPA head Sonny Pruitt has championed the energy industry and other major polluters, reversing rules that were put in place to protect the environment from them. Many of the rule changes have flown under the radar while others are being challenged – sometimes successfully – by state attorneys general. Some of those changes, if they go into effect, are bound to affect the food stream in negative ways. Among the rules that have been chopped or are on the chopping block:

At the cross between the environment and wasted food – curbside composting, which can help cities reduce food waste and methane gas emissions at the same time. Curbside composting programs make it easier for residents to dispose of food scraps. As of 2015, there were about 200 cities in 19 states with an official municipal curbside composting program. Those programs served an estimated 2.5 million people. Those numbers have been steadily increasing since around 2005. While the largest number of programs are in western states, Massachusetts boasts five cities with curbside compost collection – Cambridge, Ipswich, Salem, Hamiltion/Wenham, and Manchester by the Sea.

Learn more about curbside composting at:

The past few years have been marked by outbreaks of food-borne illness that point out the dangers of industrialized farming and national distribution. Possibly the best known case is the 2009 outbreak of salmonella that was eventually traced to the Peanut Corporation of America. More than 700 people were sickened and nine died of salmonella found in a huge range of products that used peanuts or peanut products that were processed in one of PCA’s plants. The outbreak affected nearly 4,000 products made by 360 companies in 46 states – and it wasn’t even the largest or most widespread outbreak in the last 10 years.

This year, look for food policy news related to the Food Safety Modernization Act signed into law by President Obama in 2011. Touted as the most sweeping food safety regulations change in more than 70 years, the FSMA granted new powers to the FDA and changed the agency’s focus from reactive – cleaning up after an outbreak happens – to proactively working to prevent food-borne illnesses. Since its passage, industry groups have lobbied hard to be allowed more time to implement the rules, and have successfully paused enforcement of many of the new regulations.